A pilot project is in the works that will provide the Chico Police Department – criticized for its lack of crisis intervention efforts in the past – with two mobile mental health counselors to work alongside police officers 10 hours a day.

The program is described in a Nov. 27 memorandum, written by Butte County Department of Behavioral Health Director Dorian Kittrell to the county Board of Supervisors and obtained by ChicoSol.

Kittrell said his department is working on a memorandum of understanding (MOU) with Chico PD to assign two full-time mental health workers to the pilot mobile crisis response team, which will operate seven days a week from about 8:30 a.m. to 6:30 p.m. read more 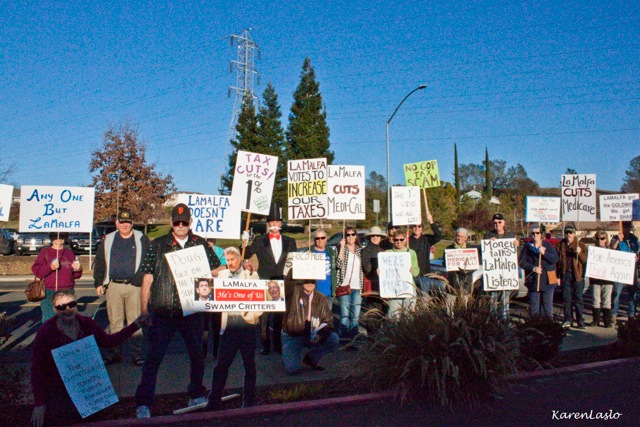 About 75 people showed up to protest the GOP tax bill Tuesday at the Oroville office of Congressman Doug LaMalfa. Protesters organized by the Democratic Action Club of Chico and other groups came from Chico, Oroville, Rocklin, Quincy and other towns, arguing that the bill will cut taxes for the wealthy and raise taxes for the middle class.

As the nation reckons with a steady stream of stories about high-profile men accused of sexual misconduct, women are sharing their own stories on social media using the hashtag #MeToo.

The movement toward reporting and confronting sexual misconduct has for years been gaining momentum on college campuses. Today, many students are comfortable reporting sexual violence, says Dylan Saake, Chico State’s coordinator for compliance with the federal gender-equity law known as Title IX. To be in compliance, colleges must provide students safe learning environments, free of gender-based discrimination, and respond promptly and equitably if sexual misconduct is reported. read more

The billboard stating in white lettering on a black background, “Black Friday Matters,” was for Down Range Indoor Training Center co-owner Steve Dyke a clever piece of Black Friday marketing that placed his gun shop in the news and public eye.

That it played off the name of Black Lives Matter, an organization tackling the problem of deadly police shootings in black communities, was not problematic for Dyke, who is also an officer in the Chico Police Department. Dyke argues that Black Lives Matter is based on a “false narrative.” read more The complaint about the Down Range “Black Friday Matters” billboard was one of five that has so far been submitted to the Documenting Hate database from Butte County. Four other reports were made on use of racist epithets and stereotyping.