Marc Thompson had a big smile – broad and gap-toothed — and an even bigger personality. He made a mark on people, “like a blazing star across the midnight sky,” in the words of activist Lee Mun Wah, one of Thompson’s mentors. And he had dedicated his young life to fighting against a litany of social injustices. read more

Tyler Rushing, who died during a chaotic confrontation in close quarters with Chico police, most likely succumbed to an earlier “devastating gunshot” wound from a private security guard responding to a burglary.

That’s the conclusion of Butte County District Attorney Mike Ramsey in a 17-page report made available to ChicoSol and other news media prior to a press briefing by Ramsey this morning.

Ramsey also wrote that a medical examiner was taken aback after multiple toxicology reports turned up a “moderate” amount of marijuana in Rushing’s system but no other drugs. read more 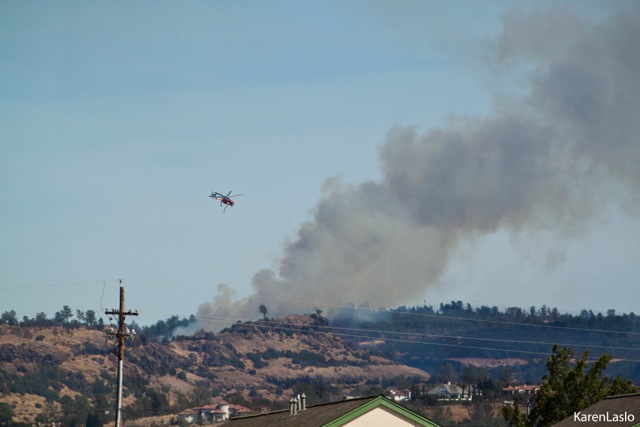 A Cal Fire helicopter flies over the 50-acre fire that broke out in vegetation along Highway 32 today. The fire was 5 miles northeast of Chico, Cal Fire said, and forced the closure of one lane on Highway 32.

Scott Rushing stood Sunday across Main Street from the title company building in which his son, Tyler, was shot to death July 23 by Chico police.

“I guess you could call it his mausoleum,” said Rushing, before conducting a moment of silence in memory of his only son and other victims of law enforcement killings in Butte County. Rushing said he found it “particularly abhorrent” that his son’s body was Tased and handcuffed after the fatal shooting.

A bit earlier, Rushing, along with his wife Paula, had spoken to a group of about two dozen gathered at the corner of Fourth and Main streets – City Hall serving as a backdrop – and he made a tearful plea for police restraint in dealing with people in mental crisis. (See video at right.) read more

However, the Chico Police Department, involved in two of those fatal shootings, is sending three officers to the CIT academy, after having almost no presence there in recent years.

The academy, which begins Monday at the Chico Fire Training Center, provides instruction in de-escalation techniques and in dealing with the mentally ill. For its first seven years, the 40-hour training was conducted by Andy Duch, a recently retired Butte County sheriff’s captain. Duch quit the CIT post in protest shortly after Chico police shot and killed Desmond Phillips, a 25-year-old mentally ill black man, in his West Fourth Avenue living room on March 17. read more

Editor’s Note: ChicoSol asked Diane E. Schmidt, the ranking professor of public administration in the department of political science and criminal justice at Chico State, to comment on the two deadly law enforcement shootings in Butte County that have taken place since the March 17 Chico police shooting of Desmond Phillips, a 25-year-old mentally ill black man. We have elected to run her response as a guest commentary.

I don’t see these situations as being comparable to Desmond Phillips’ killing. Desmond’s killing violated the sanctity of the home — the trust of the family calling for medical help — and instead they had to endure police officers pepper-spraying the dog, breaking in the door, and shooting the very person who most needed medical intervention. Desmond’s killing was a violation of the public trust, not just a tragic overreach of police power. read more