A state Department of Justice investigation has been launched into the Chico police killing of Desmond Phillips, a mentally ill young black man gunned down in his living room last March, Phillips’ father claimed at a news conference Monday.

Ramsey previously ruled that the shooting by Chico police officers Alex Fliehr and Jeremy Gagnebin, who together fired 16 rounds at Desmond Phillips, was justified. A wrongful death claim – often a precursor of a lawsuit – was filed by the Phillips family but denied by the city. read more

Minor, an associate professor in CSU, Chico’s department of international languages, literatures and cultures, chronicles her story in a new book, “No Screaming Jelly Beans: Trying to Pursue a Career While Raising a Son With Autism.” read more

But for the last 16 months, she’s remained on Chico State’s payroll – first while on vacation, then on administrative leave and finally as a “special assistant” for California State University’s Office of the Chancellor in Long Beach – collecting employee benefits and grossing $324,256. The total compensation Hoffman received from Chico State for the 16-month period exceeded $418,000, including about $5,500 a month in retirement system payouts. read more

The Chico City Council voted unanimously Tuesday to consider moving the Jesus Center and consolidating services to the homeless in southeast Chico. But Chicoans packed the meeting, some in favor of the plan, some opposed and some warning that the homeless shouldn’t be merely shuttled from downtown unless more services will be provided.

Bill Such, former Jesus Center executive director, said he fears the move could “compromise the identity” of the center. Such compared the homeless to Jesus of Nazarene, who he said was “intentionally homeless” and rejected by his family. “In Christian terms, Jesus, with nowhere to rest, is the homeless god,” Such said. read more 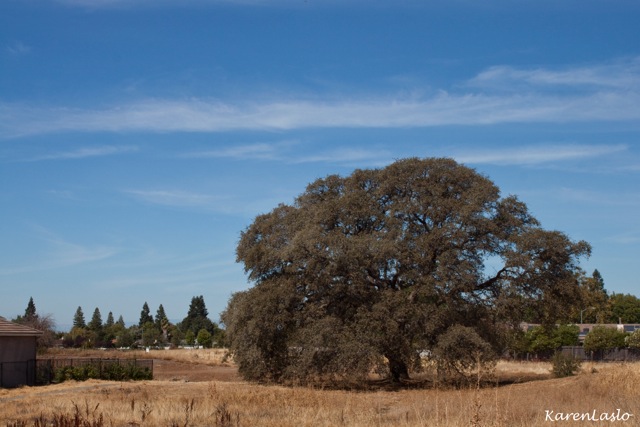 This Blue Oak (Quercus douglassi) is one of 10 Chico Heritage Trees. It has a 53-inch diameter, quite large for a Blue Oak because they grow very slowly. Chico’s urban forester, Richie Bamlet, estimates the Oak is about 150 years old. It can be viewed at the east end of Baroni Park or by bicycling down to the end of Preservation Oak Drive off East 20th Street.

If Bamlet is correct about the tree's age, it took root during Reconstruction after the American Civil War. For more information about Chico’s Heritage Tree Program click here or watch for more ChicoSol photo features on this topic.

A Butte County sheriff’s sniper was nearly 130 yards away from a drunken, pistol-waving Mark Jensen when the officer shot him dead with a rifle Aug. 17 in the roadway in front of his Durham residence.

The distance between the two men was about the same as from the back of one end zone to the back of the other end zone on a football field.

Jensen never fired his .45 caliber Glock semi-automatic, but the sniper, deputy Matt Calkins, peering through his rifle’s scope, believed Jensen was pointing the handgun at him and fired in self-defense, Butte County District Attorney Mike Ramsey ruled this week. Calkins was in a prone position behind a tree in an orchard wearing camouflage clothing, including a dirt-colored helmet, when he pulled the trigger on his .308 caliber rifle. read more